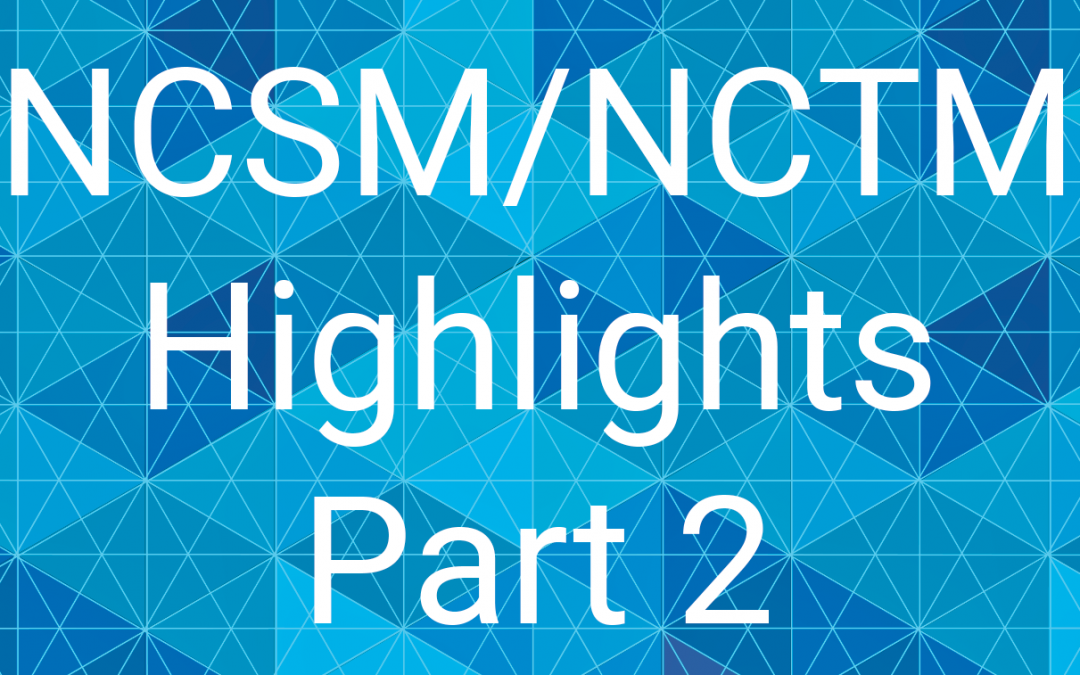 Six of our staff traveled to San Diego to attend the NCSM and NCTM conferences at the beginning of April. Below are four staff members’ reflections on a session that stood out to them. (Read the first three here.)

Keith: “The Iris Carl Equity Address: Equity and Agency from Inside the Classroom” by José Luis Vilson (NCTM)

José Vilson began his talk with an elegant, powerful statement — “Equity is belonging.” — and then challenged us with this question: “Do you believe your students belong?”

Among the many strong points Vilson made was this ­— “Math is not, and was never, neutral.” He went on to say that schools don’t teach students to see themselves in the math, and that practitioners of math pretend immunity ­— that math is neutral so issues around identity and agency don’t apply. He also said that students often view math as “more theirs than mine.” He reminded us that math teachers are equally as significant, if not more so, than mathematicians.

Vilson said, “Adults must, however imperfectly, emit justice in their words and actions,” and asked us to think about what conscious and unconscious decisions we make towards justice and equity in our work. Throughout his talk, he returned to this idea of “equity is belonging” and spoke passionately about the students in our classrooms. I continue thinking about, and being inspired by, these statements:

How do we meet the needs of all learners? How do we differentiate? and How do we do we differentiate effectively? These might be the three most common questions that are in the minds of many educators. In their NCTM session, Cameron and colleagues presented an engaging and compelling approach to working on these questions. Just-Right Games is a 10-15 minute routine that is a part of the larger math instruction within a classroom, that creates a space for both small group instruction and students working independently.

While the session was, in fact, the just-right balance between practical and pedagogical, what resonated most for me was the connection to my work on differentiation. In order to present or adjust a game to the “just-right” level, it is essential that we identify and understand not only the mathematical focus of a game but also the mathematical potential of the game. Then we need to consider the students. Drawing on our 1:1 conversations and interactions with students, as well as our observations of them at work, we must consider where they are and where we want them to go next with a particular math concept (e.g. counting, comparing, understanding 10 etc.). Based on our understanding of the math and our knowledge of the student, we can then make decisions about how to adjust a game by perhaps changing the gameboard or adapting the deck of cards, thus making a just-right instructional decision.

Arusha: “Why Do These Kids Not Want Tutoring to Be Over? Turning Unsuccessful Students into Eager Mathematicians” by Kathy Richardson and Sue Dolphin (NCSM)

Have you ever noticed a student suddenly giggle during math? After asking this, Kathy Richardson showed a clip of a girl using ten frames to add. At first she counted or added on in parts, showing little confidence. But then you hear her giggle. From that point on, she solved each problem by making a ten and adding on the leftovers, and confidently answered Kathy’s questions. Kathy described that giggle as the moment a student knows she knows something—when she has figured something out.

Sue Dolphin went on to describe an afterschool tutoring program for 4th graders who did not do well on a computerized assessment used by their school to assess progress. They began their work with Kathy Richardson’s Ten Frames Assessment, to identify the specific needs of the students, and found that many seemed to lack some essential understandings of the base ten number system. Like the girl in the video, they were not making use of tens to solve problems. As Kathy and Sue put it, these 4th graders were in “survival mode” during math class, perhaps in large part because “place value is where they fall off the cliff.”

The tutoring sessions focused on ten frame games—games frequently played in K-2. The 4th graders felt successful, perhaps for the first time. They were having those giggling moments of figuring things out and making connections, and they wanted to come back for more. By the end of the tutoring, almost all students had improved on both the computerized and the ten-frame assessment. Not only that, one of the teachers who had been nervous about going “so far back” saw a big effect in both her students’ confidence and in how they were solving problems in her 4th grade classroom.

This session has had me pondering a few things:

In this session, Amber Willis and Karen Reinhardt presented some of the work they are doing at TeachingWorks, the University of Michigan project whose motto reads: “Great teachers aren’t born. They’re taught.” They had us think about the various aspects of leading a group discussion, and then focused in particular on one: orienting students to one another’s thinking. Before looking at a tool for observing a discussion, they asked, “What would an observation tool that is intentionally built to connect the work of teaching to the work of advancing justice look like?” We talked about the goal of such a tool being to identify specific moves the teacher can make to intentionally disrupt patterns of inequity and to assign competence to marginalized students. Then we used two different versions of an observation tool to analyze a video of teaching, and noticed how one version – developed together with collaborating educators from a local district – helped us better see, describe, and discuss the ways the teacher was orienting students to one another’s thinking. This version included ideas about identity and agency and was more explicit about the role of the teacher in supporting students in communicating, attending to, responding to, and recording mathematical ideas, right or wrong. They also provided a filled-in tool, to give examples of the kinds of observations one might make and record on such a tool.

← Previous Post: Reflections on NCSM/NCTM, Part 1 Next Post: "Why are there so much 1s in these numbers?" →