Learn more (pdf) about the units, the math, the components, and some of the games, activities, and contexts at Kindergarten.

Unit Summaries contains a brief summary of the mathematical content of each of the units in the Kindergarten sequence.

Math Content by Grade describes the mathematical work of Kindergarten in each of the following content areas: Counting and the Number System and Addition and Subtraction (both listed under Number and Operations-Whole Numbers), Measurement, Geometry, Patterns and Functions, and Data Analysis. The mathematical emphases and benchmarks for each content area are also included.

Scope and Sequence contains the mathematical emphases, math focus points, and assessed benchmarks for each of the units in the Kindergarten sequence.

Explore two Sessions from the second Kindergarten unit, Counting and Comparing: Measurement and the Number System 1. All of the materials referenced in the Session—a Resource Master, Student Math Handbook pages, an Algebra Essay, and a Dialogue Box—are also included.

Learn about the various components that make up the Core Curriculum Package in Kindergarten, including: materials available in Spanish; materials included in the Manipulatives Kit, the Completer Kit, and the Cards Package at Kindergarten; and additional, optional resources.

Teacher-written Classroom Cases about supporting the range of learners in Kindergarten are available for download here and here. The latter deals specifically with the Counting Jar.

Investigations and the CCSS

Learn more about Investigations and the Common Core State Standards at Kindergarten. The sample Session, Roll and Record: Teen Numbers, is one of several Sessions focused on helping students see the teen numbers as one group of ten and some number of ones. It is designed to be incorporated at the end of the sixth Kindergarten unit, How Many Do You Have?: Addition, Subtraction, and the Number System. The instructional plans layout Session-by-Session changes to each Investigation in that unit. 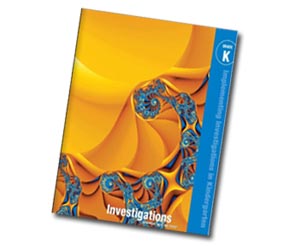 What does an Investigations classroom look and sound like? The videos below provide images of teachers and students at work in a range of kindergarten classrooms.

Students discuss their responses to Today’s Question – “Do you have a dog as a pet?”

This teacher introduces the class to a new kind of problem: How Many of Each?

This teacher checks in with students as they count and represent the contents of the Counting Jar.

This teacher clarifies the rules of Double Compare for two students, then discusses two rounds with them.