“One, two, three, four, five…” I was interested in how quickly Owen and Ravi figured out a way to count the set of 40 yellow hexagons in their Inventory Bag. The boys took turns saying a number as they placed the hexagons in a line which started to snake across the rug in the meeting area of their kindergarten classroom.

“Twenty-eight, twenty-niiiinnnne…” Ravi pauses unsure about what number comes next. Owen whispers “30” and Ravi says “30” as he places the thirtieth block in the line. I’m surprised when Owen places the next block and says “40. No, wait. That’s not right! It’s 31! Your turn Ravi.” Ravi and Owen continue taking turns, and finally place the last block. “There are 40 hexagons,” Owen announces. “Yup 40” nods Ravi. “We counted all of them.” They admire the long line of blocks that crosses part of the rug and then circles back on itself.

I comment on their careful counting and how they took turns placing a single block as they said the next number in the counting sequence, and then ask if they could think of a way to double-check their count. “Let’s count them again but this time let’s put them here like this, in this space.” The boys are kneeling on the rug facing each other and Owen gestures to the space between their knees.

They quickly push the long line of blocks back into a single pile and once again take turns selecting a block and placing it in a neat column between them. I notice Ravi scooching back each time a block is placed, to make room for the next block. Owen places the tenth block and, without comment, instead of scooching back some more, Ravi begins a second column with the eleventh block. The counting continues as before, with each boy taking a turn placing a block not only in a straight column but also carefully creating even rows. Ravi does not pause after Owen places the thirtieth block, quickly saying 31 and starting a fourth column of blocks. I wonder if the boys are aware of the array they are creating, with groups of ten.

Owen places the last block, completing the fourth column of ten and says “41!” We all look at each other, somewhat surprised. Me, because I didn’t catch the counting error, probably because I was admiring their neat groups of ten and wondering if they would notice them, and Owen and Ravi because, well, I had a hunch about what surprised them but wasn’t sure.  “No, it can’t be 41” says Ravi. “No, right,” says Owen. “It can’t be 41, it has to be 40.” Before I could ask the proverbial “Why?” he continued. “We counted 40 before and now we are counting the same blocks again and well, they are all here. No blocks were added.”   Ravi nods along in agreement as his partner explains.

“Hmmm…so you counted the first time and got 40 hexagons. Then you counted the next time and got 41, but you don’t think that is right. Is there a way you can figure out how many blocks there are for sure?” I’m resisting the urge to point out the convenient groups of ten they have created, not sure whether this is one of those “teachable moments” we always talk about or not. I’m really interested in what sense they are bringing to this counting challenge.

“Let’s count them again,” suggests Owen. “But this time let’s do this,” says Ravi. He takes a pencil and using the eraser end, taps each block as he says “One, two, three. I’ll tap each block like this.”

The boys once again take up the count, and, as Ravi taps each block with the pencil, they take turns saying one and only one number. I’m interested in the fact that when Ravi gets to the end of a column, he taps the block at the top of the next column rather than the adjacent block. The boys finish their count and Ravi says, “Yes! I knew it was 40.” Both boys then transition to recording their work.

I am impressed by many aspects of this interaction. First, by their cooperative approach and the tenacity with which they are working on this task. They are genuinely interested in figuring this out and the task of determining how many, is serious business. Second, I am impressed by all that they know about counting – the sequence of numbers; the need to assign one number to one block; the importance of organizing and keeping track of what has and has not yet been counted; and the understanding that the last number describes the total number of blocks in the set. They also have the ability to recognize when something does not make sense, as in Owen’s self-correction after lapsing into counting by tens and both boys’ discomfort with getting two different answers. There is an element of mathematical argument to Owen’s justification that 41 did not make sense “because no more blocks were added.” They also might have some instinctual sense of putting things in groups but I was not sure if the columns of ten blocks signified some knowledge of the importance of ten or if they just ran out of space and got tired of scooching back to make more room.

Noticing that most of their peers are still working and that the near-perfect arrangement of the 40 hexagons in a 4 x 10 array has not yet been disturbed, I decide to ask a question that might get them to consider those groups of ten. “I noticed that each time you counted the blocks, you counted them by ones. I’m wondering if there is another way you could count the blocks if you didn’t count them one at a time?” I chose not to be explicit about how they might do that because I was interested in whether or not counting by something other than ones was a strategy they genuinely owned and understood.

Owen’s eyes light up as he exclaims “We could count them by tens!” I silently cheer and then am surprised when he starts to dissemble the array. He places his hand over a group of blocks and then slides them in front of Ravi. I notice that there are eight blocks, conveniently arranged in a row of five with a row of three below. 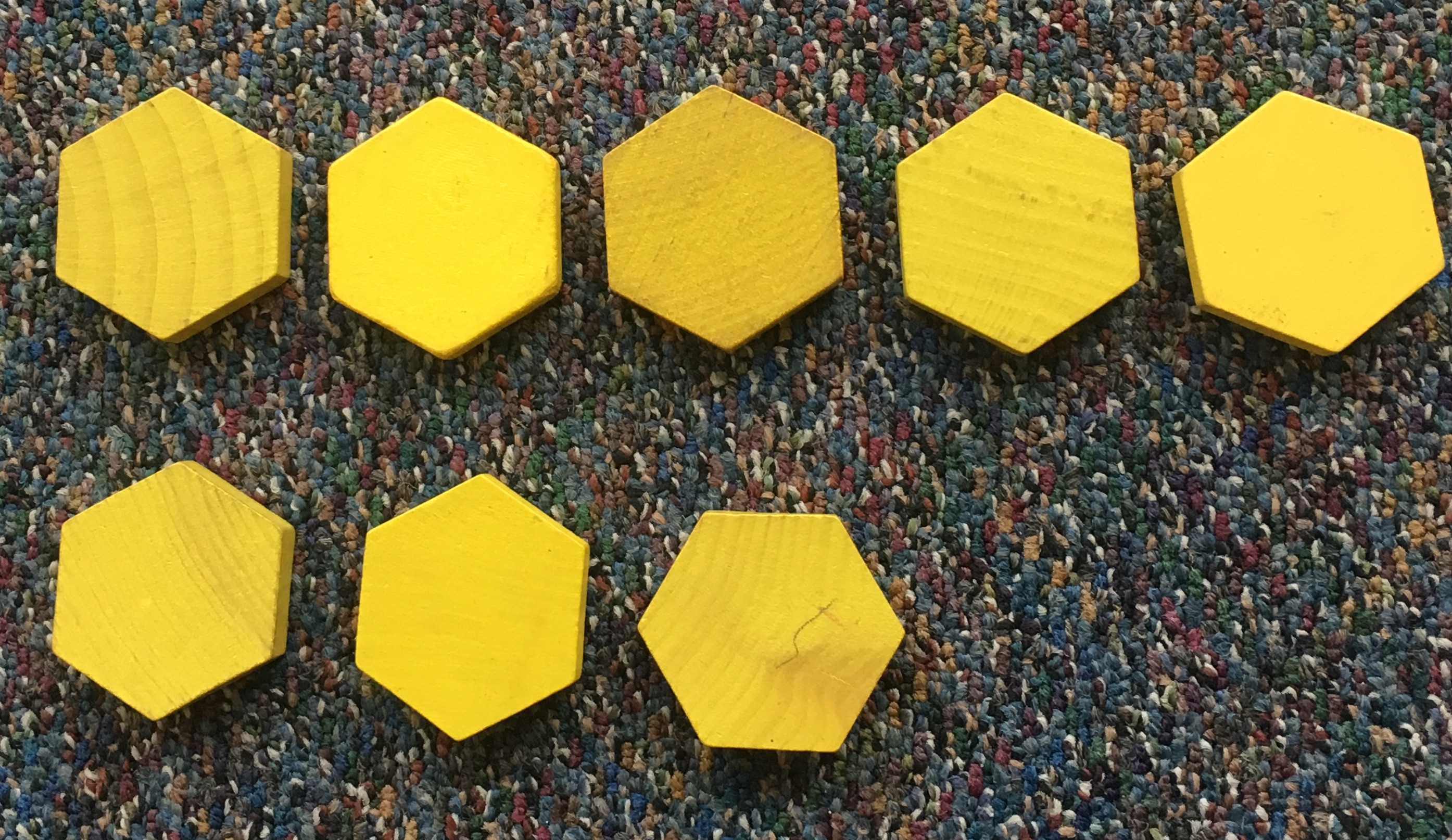 “Just like a ten frame,” I think to myself and wonder if that was intentional or coincidental. “That’s only eight,” says Ravi. “We need some more.” Owen counts the eight blocks and slides over two more as he says “nine, ten. Okay there’s ten.” He then slides over another group of blocks, six this time, again arranged as five in the top row and one in the bottom row. The ten frame is once again so clear to me but I have a feeling that Owen’s arrangement of blocks was happenstance, rather than planned. “So here is another group,” says Owen.

“Is it ten?” I ask. “No” says Ravi. “How many more do you need to make this a group of ten?” I can see both boys counting with their eyes and bobbing their heads and I am imagining them saying “One, two three four, five, six…” Owen slides over more blocks and says “seven, eight, nine, ten. There’s ten.”

There are two distinct groups of ten and I’m now wondering if either boy is seeing them as anything more than two groups that each have ten blocks. Both groups are arranged as a 2 x 5 array but neither boy seems to be seeing them as a group of ten. I’m now wondering what Owen meant when he said “We can count them by tens,” but, before I can ask my next question, Owen says, “Wait this is too hard. I have another idea. We can count them by twos. That will be easier.” He slides the two groups of ten blocks back into place, recreating that beautiful 4 x 10 array that I am now convinced he does not see as beautiful in the same way I do.

I watch as Owen begins to count the blocks by twos. He carefully uses two fingers to slide two blocks at a time over to Ravi. “Two, two, two, two, two,” Owen counts as he once again organizes the blocks, this time into two columns. He continues saying two as he successfully moves all of the blocks in the first two columns in front of Ravi.  “Okay, your turn!” Ravi takes up the count of “two, two, two, two” as he slides over the third and fourth columns of blocks, relocating them next to the other two, and thus recreating the 4 x 10 array in a different location. “There. We counted them by twos.” “Yup! You sure did! That was careful counting. I noticed that each time you moved two blocks, you said ‘two’ Now I’m wondering how many blocks are there in all?”

“Well we could count them and figure that out” and before I could interject, Owen and Ravi took up the count. Ravi counted the first two columns of blocks by moving back and forth between each column and counting one, two, three, four, five, six as he dropped down to count the next row of two blocks. When he got to 20, Owen took over, counting the blocks in the third and fourth column in the same way. He confirmed that there were 40 blocks just as their teacher was encouraging the class to put away their Inventory bags and assemble on the rug.

Ravi and Owen demonstrated their fluency with counting a large set of objects by ones. They also demonstrated a developing knowledge of counting by groups as evidenced by their idea to “count them by tens” and “count them by twos.” From their actions, it seemed that they also had a sense that in order to do this, they needed to put the objects into equal groups of ten or two. I was particularly interested in Owen’s enactment of what it means to count by twos, as he carefully moved two blocks at a time, and labeled each group as “two” and Ravi’s willingness to follow his strategy. This, combined with their decision to recount the set of blocks by ones, suggests that the boys are not yet at the point of understanding the cumulative aspect of counting by groups, at least not with a group of 40 objects.

Students learn to count by having many opportunities to count sets of objects that vary in size; by sharing their counting strategies and watching and listening to peers engage in counting; and by considering questions and situations that focus and engage them in one or more of the essential aspects of counting they might be working on. Our challenge? Not to over-scaffold, not to over-teach and not to over-interfere; but instead, to observe, to ask questions that allow students to demonstrate their understandings (and misunderstandings) and to make decisions based on what we know about our students and about the serious business of counting.