“This is Only Getting Better!…And Harder!”

As their teacher, Karla, introduced them to Plus or Minus 10, she explained that they would need numeral cards (10-90), cubes (assembled in sticks of ten), and a new deck of cards. When she displayed the +10/-10 cards, the students, many of them on their knees, some literally bouncing up and down and clapping, were clearly excited. Oooo… Whoa… Plus ten… Minus ten. I hear two students exclaim This is only getting better… This is only getting more harder!  I was amused and curious about their reaction.

Karla turned over a numeral card (32) and explained that, just like the other games they have been playing, partners need to first build the number with cubes. She asked students to help her display 32 with cubes – in sticks of 10 and singles – and then turned over a +10 card.

What do you think this card is telling me to do?

Add ten more cubes… Add one ten… Plus ten. Most students were nodding and giving their agree symbol—same, in sign language.

The teacher laid a stick of 10 cubes to the right of the 32 and asked, How many? 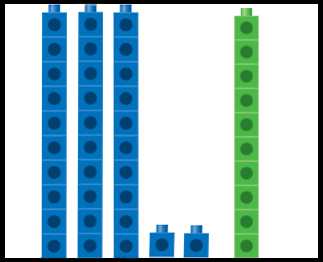 Karla wrote 32 + 10 = 42 on the recording sheet and reviewed one more problem, 45-10. The students responded with similar strategies, showing an understanding of the tens and ones structure of these two-digit numbers, what it means to add or subtract a ten, and flexibility in how they compose and decompose quantities. Everyone seemed comfortable with the game and clearly the expectations around explaining your math thinking and considering the thinking of others were shared by teacher and students.

Karla dismissed them from the meeting area and students went off to collect the necessary materials from the math shelves and choose their spots around the classroom. Some pairs chose to work at their desks or a small table, while others played on a counter along the back of the classroom or set up their game on the rug. Everyone seemed excited and quickly got down to work. I was struck by the level of independence and cooperation of these 25 first graders and am still wondering about the excitement they exhibited when those new cards came out. Were they engaged by the idea of adding or subtracting 10 to number and eager to hear about how the cards would be used? Did the notion of adding or subtracting 10 somehow bring the math to a new and challenging level? While it’s hard to know for sure, one thing that was clear to me—these kids were in charge…in charge of the math; in charge of their learning; and in charge of themselves. I shared my observations with Karla as she watched her classroom at work and she proudly agreed with her students’ perspective, that Yup it just keeps getting better.

← Previous Post: The Hard Work of Counting by Groups, Part 2 Next Post: When the Math Is What's Exciting →