When the Math Is What’s Exciting 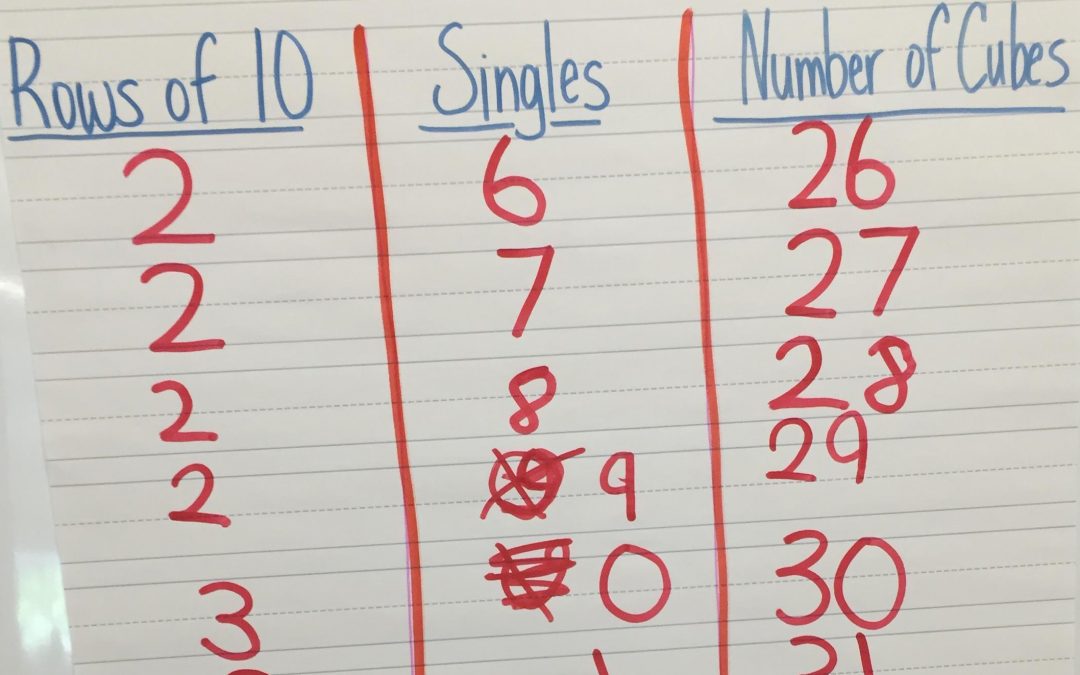 I’ve been really lucky to spend time in a grade 1 classroom this spring, as they tackle the final number unit of the year. 1U7 is the culmination of students’ work with addition, subtraction, and place value. Building on the work of the earlier number units, it introduces some big, important ideas, many of which are new to the 3rd edition of grade 1. These are first graders who had the 3rd edition in Kindergarten and now have a self-proclaimed lover of math, who is teaching the 3rd edition for the 2nd time. I’ve written before about particular activities or interactions (see Part 1 and Part 2) but today want to write about some small moments that have stuck with me and add up to something big.

How Many Now? with Ten Frame Cards 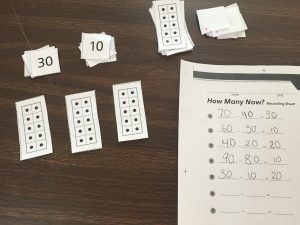 Kids were playing a game where players turn over two Multiple of 10 Cards, build the larger number with Ten Frame Cards, subtract the smaller number, and use an equation to record. I asked one pair: “I’m looking at your recording sheet, and I’m noticing something. All of your answers (dragging my finger down their answers column) are counting by 10 numbers. Why is that? Can you only get counting by 10s numbers? Could you ever get an answer like 32 or 27?” Their eyes scrunched up, thinking. “No.” “Why not?” “Because look at the cards. We’re only using 10s numbers.” One held up two Multiple of 10 Cards and the other pointed to the pile of Ten Cards.

At the end of a discussion about what numbers look like when you build them with tens and ones, the teacher said, “These singles, these 3, I’m going to tell you what they’re called. They are called ones.” I heard a few gasps and saw many children pointing across the room with obvious excitement. She asked what they were noticing. “The Days in School Chart says ‘ones’!” The chart they are pointing to has two sets of pockets labeled “hundreds,” “tens,” and “ones.” (One set holds digit cards, the other, base ten blocks. Today is day 150.) “You’re making a connection between our discussion, and our Days in School Chart. That’s the first time you’ve made that connection. Very cool.” 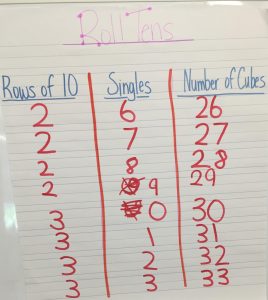 Race to the Top: How Many Tens?

In this game, players turn over a multiple of 10 and a number 0-10, build it with Ten Frame Cards, find the sum, and figure out where to record the total.

While wandering, I asked several pairs of students, “Last week you were playing a similar game, and all your answers were counting by 10s numbers… but I’m noticing that today you are getting answers like 32 or 27. Why is that?” Just as they did last week, when they were playing How Many Now?, most students pointed to either the Primary Numbers Cards (0-10) or their piles of Ten Frame Cards showing the numbers 0-1. They said things like “because we have these.” Two pairs took it one step further and added: “But if you turn over a 0 or a 10 [Primary Number Card], you’ll get a counting by 10 number.” 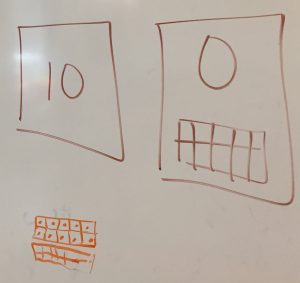 During the discussion of this game, the teacher drew a picture of a 10 card and a 0 card. “If this was your hand, what did you build?” Nik came up and drew one full Ten Frame; Jax drew an empty one. There was discussion about whether you need to draw the 0 card (or place it while playing). Jax asked, “Why do they even have that card?” The teacher asked what kids thought, and they had ideas: you need it for other games like Make 10 with 3 Numbers, you need 0s for other numbers like 20, and it can help preschoolers understand what 0 is. Then Jax says, “Maybe you need to do it to show your hand was 10 plus zero.”

The introduction to this game – about adding and subtracting 10 to/from two-digit numbers – was an exciting moment described in last week’s blog: “This is only getting better!…And harder!”

As I wandered the room, a pair called me over. “Miss Megan, Miss Megan, we got 13-10!” I asked what was exciting about that. They were clearly surprised to get an answer with only one digit. I wondered out loud about getting answers with only one number or digit… is this the only problem that will happen for? Reagan, thinking for a minute: “To get a single digit number it has to be less than 20.” She talked through 15 as an example. I rephrased her thinking, and wondered about 19. Her partner agreed: if you take away 10 there’s 9 left.

This Is Counting by 10s?

Class began with a discussion about adding 10. The teacher first displayed 25, with magnetic towers of 10 cubes and single cubes. Kids figured out that 10 more would 35, and 10 more would be 45. As they described what they noticed about those numbers, which were recorded in a column, kids predicted that the pattern would keep going: 55, 65, 75. The teacher then asked if they could extend their column of numbers upwards. Determining that 15 was 10 less than 25 and 5 was 10 less than 15 proved challenging, but doable. It took time – and modeling with the magnetic cubes – for students to see and agree that the column of numbers was counting by 10s, even though it didn’t go 10, 20, 30… Once there was agreement, the class agreed that this was “a mind blow.” (This was an oft-repeated class expression. Picture hands at each temple, expanding upward, and the sound of an explosion.)

Counting Around the Circle

During the Classroom Routine Start With/Get To, the class counted around the circle by 10s, starting at 5. Even though the teacher specified the beginning and ending numbers, the kids ignored her, and went ALL the way around the circle, ending at 205. They were super excited and laughing, “We never go that high!” I noticed Max, on the corner of the rug, doing the “mind blow” gesture.

There are several things I keep thinking about as I reflect on this unit in this class.

Making connections. Kids are making connections and they are very excited about it – whether it is their noticing (e.g. the “ones” on the Days in School Chart) or the result of one my questions (e.g. why are you only getting counting by 10s numbers as answers?). The connections they are making are about the math ideas at the heart of this unit.

Asking questions. These students were so willing to engage with and think through my questions, to share their ideas – in process – with me. Their belief in their ability to do so was clear. But they were also excited to take up my questions. And, most importantly, they were asking and pursuing their own. (Why do they even have a zero card?)

Lingering. Kids were working on a set of related ideas for 5 weeks. Ideas came up repeatedly, giving students time and room to think deeply about them. The teacher also played a critical role in allowing these ideas to linger. I’m reminded of her response to a comment about zero: “Hmmm. There’s that guy again.” She did not feel compelled to explain. Zero came up a lot in this unit as students solved and discussed problems like [10]+/-0=[10] and [10]-[10]=0, and as they thought about what the 0 in 50 means and how many tens are in 5, and each time students would return to the conversation with new questions or examples or wonderings.

It’s the math. There were so many moments of genuine excitement; moments when kids had an aha! and wanted to share their idea. And when I look back, they were all about mathematical ideas. Mathematicians stop and wonder when something surprising happens (e.g. you can count by 10s and say numbers that don’t end in zero) or when they notice something interesting (e.g. if you put out 10 and then take away 10, you’ve got nothing). (And, mathematicians find zero very interesting!) There were plenty of students who could have ventured into work with larger numbers, and some did. But these students were thinking so hard and were challenged by, and so engaged in, mathematics that seemed “just right” for them.