Teaching Investigations 3 Remotely: Not So Different 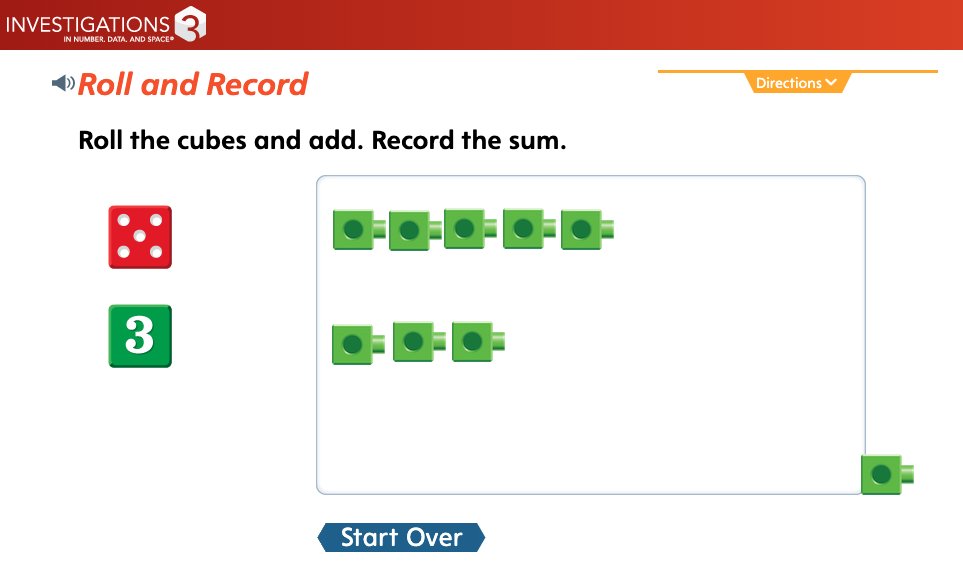 Our staff has been thinking hard about how teachers are using Investigations 3 to teach math in all of the different scenarios they are faced with this year. We’ve been visiting the remote classrooms of teachers we’ve collaborated with previously, to learn from teachers and students who are teaching and learning math online, and to see how the rigor and coherence of the curriculum is supporting them in that work. This series of blogs will share some of what we are learning. (Read an introduction to this series, and the second blog.)

Classroom Situation: This session – the first of 1U3, How Many of Each? How Many in All? – took place in a “hybrid” first grade class with 22 students. Half of the class goes to school Mondays-Tuesdays, the other half on Thursdays-Fridays, and everyone is remote on Wednesdays aka “Zoomsdays.” Because students – all of whom are pseudonymed – are in school twice a week, the teacher can send home the physical materials (e.g., dice, game instructions, gameboards) they will need at home. This lesson was about an hour long and was modeled after the following plan: 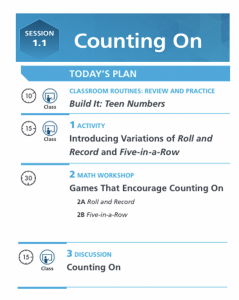 I had a lot of questions as I joined my first elementary math class via Zoom—about the technology, about the virtual environment, and about what was reasonable to expect of first graders and their teachers. I wondered how visiting an online class would compare to an in-person observation. And I was curious about how (and how much of) the intended curriculum could and would be enacted remotely. An hour later, I had some answers. (And more questions.) The biggest lesson? In so many ways, it felt like a typical visit to an Investigations classroom. Read on to hear why.

Classroom Routine The class began, as many do, with a brief Classroom Routine. The teacher used the Teacher Presentation (built into Savvas Realize) to do Build It with the whole class. She shared her screen and encouraged students to “pin” it. Together, they identified and then represented the numbers 20, 15, and 10, with pennies on two ten frames. These first graders easily unmuted their microphones to speak, and then muted themselves again. The teacher moved the pennies as instructed by the students. The highlight? When Seth said, “One and a half [ten frames] is 15.” I was stunned. I’ve seen a lot of Build It and I’ve never heard a first grader talk about one and a half ten frames before. I’ve often said I never visit a classroom without learning and/or being surprised by something; this was no different. 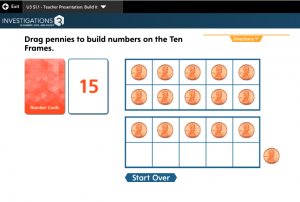 Introducing Roll and Record The class then transitioned into the main focus of the math lesson. After reminding students that they had played Roll and Record with two 1-6 dot cubes earlier in the year, the teacher used the Teacher Presentation to introduce the new variation. She asked students to use their fingers to show what she’d rolled, and dragged cubes out to represent the problem. 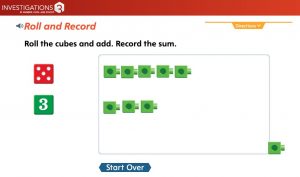 “Take a minute and think about this problem. Your job is to add, to combine, to find the total of 5 and 3.” After a lengthy wait time, she returned to gallery mode, so she could see all of the students. She held up a whiteboard showing 5 + 3 = and 3 + 5 = and asked for strategies for solving this problem.

Teacher: How did you use your fingers?

Teacher: Kaya counted on. Any different ways of thinking about the problem?

Teacher: Any other ways of thinking about the problem?

I was struck by the flexibility students showed in figuring out how to combine 5 and 3, and in their ability to explain their thinking. A straightforward problem like 5+3 can be an interesting and engaging problem, and discussing ways to solve it can uncover important mathematical ideas.

Preparing to Play The teacher explained that they would record the same way they had in the past, by writing the sum in the appropriate column on the gameboard. 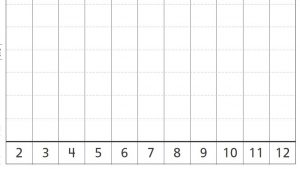 She explained that students would play, independently, in a breakout room with others. She gave them a few minutes to find the materials that had been sent home: a 1-6 dot die, 1-6 number die, a copy of the gameboard, and some connecting cubes. Before sending students off to play, the teacher reminded children they could angle their camera once in the breakout, to share what they were doing on their desk or table.

Roll and Record in Breakouts At this point, the teacher put students into three breakout rooms, to play the game with actual materials. While they played individually, they also talked together about the problems they were solving, the strategies they were using, and what they were noticing as the numbers started to fill their gameboards. I joined the teacher’s breakout room. Some highlights:

A student shared that one of her dice had 7-12 and wondered if this was right. The teacher helped her get what she needed, but capitalized on the math opportunity by asking everyone, “Why won’t a 7-12 die work?”

Someone wondered why the board starts with 2 instead of 1. The teacher put the question to the room.

As time was running down, the teacher asked kids which columns they’d filled. When they called out many of the same numbers she asked, “Why are those numbers going to the top so quickly, I wonder?”

The math of this game focuses on adding two numbers to 6, number-writing practice, and moving from counting all to counting on. These ideas were the focus of much of the discussion. But these thoughts about probability floored me. They brought to mind a quote from a recent blog from kidsquadrant.com — “Kids have great ideas, and they have great ideas much earlier than you’d think!” – and had me thinking about the importance of making room for such ideas and wonderings.

Wrap Up Class ended with a quick check in back in the whole group, as students transitioned to the next part of their day. The teacher commented on some strategies she had seen and mentioned how “we’re starting to look for counting on.” She explained that they’d be playing again — on Google Classroom or back in school – and would be learning and playing a new version of 5-in-a-Row when they were back in the classroom.

Reflections At the end of my first Zoom class, I was buzzing with thoughts and new questions.

← Previous Post: This Learning Is Not Lost Next Post: In Person or Remote: This is What Doing Math Is →