“That Seems Way Too Big”

On a recent visit to a small district in the Midwest, I got the chance to visit a third grade class that was working on division (3U5, Session 3.4). When I joined Nicole, she was in the middle of working on the following problem:

Below the problem, Nicole had written 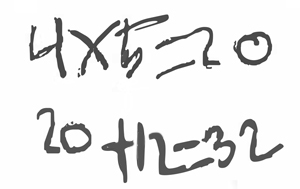 I asked her to tell me about her thinking. She said she wanted to start with something she knew, which I agreed was a smart strategy.

I wasn’t expecting that! Thinking about it now, it probably shouldn’t have surprised me. Combining partial answers is often part of a successful strategy. There’s also the challenge of keeping track of the different units the numbers in this problem represent: the number of groups, the number in each group, and the number of toys. Once you’ve abstracted that information to just numbers and equations, it can become challenging to hold on to what each number represents, and what part of the problem you’ve solved/have left to solve. That’s the work of Math Practice 2 in the elementary grades.

Me: So 17 is your answer? (She nodded, hesitantly.) Let’s go back and see what the problem was asking. (I reread the problem aloud.) So, 17 4-packs would give you 32 toy cars? (I jotted the following in my notebook and showed it to her.)

Nicole was happy to pause and re-think through the problem. She didn’t hesitate to suggest that her answer seemed unreasonable. I was seeing Math Practice 1 in action!

Me: Hmm. I agree with you, 17 4-packs sounds like it would give you a lot more than 32 toy cars. You told me you wanted to start with something you knew, and you just knew 4×5=20. What does 4×5 represent in the story?

She thought a moment, then began writing.

We talked through the connection between her work and the story again. As she did, I added to my notes:

Me: Does that seem like it makes more sense?

She agreed it did, just as a colleague joined us. I explained to Keith that Nicole and I had just had a really interesting conversation about this problem, and I wondered if she could tell him about it. Nicole was happy to. Using both my notes and her work, she talked him through our process. As she finished, Keith asked: “And, so what is your answer to this problem?”

As confident as I was in Nicole’s thinking, I held my breath. This question of what the problem was asking, and whether it was about groups, the number in each group, or the total number was slippery.

She added one final piece to her work.

As Nicole went off to play Multiplication Compare, I was left thinking about the ideas 3rd graders need to make sense of and understand as they learn about the operations of multiplication and division. But, mostly, I was thinking about Nicole’s classroom. Nicole was a problem solver. She expected to explain her thinking and was comfortable doing so. She expected the problem, and her solution to it, to make sense. When she reflected on the reasonableness of 17 as the answer, she didn’t try to force that answer to make sense; she re-connected to the problem and re-thought it through. She did not seem phased, nor embarrassed, by an error, but persevered in finding a strategy that made sense. As a one-time visitor to this classroom, this speaks volumes about the work this teacher must have done to create the mathematical community of which I was momentarily a part.