What Does It Mean To Be Smart? 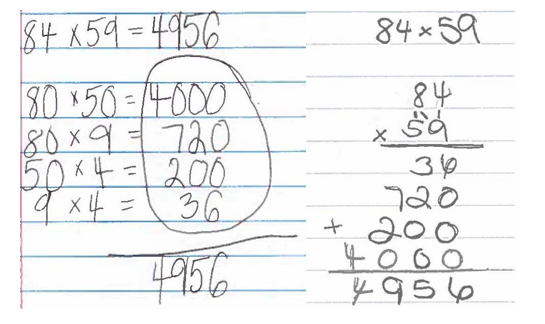 These words drew my attention to a pair of 5th grade girls in a class I was visiting, who I’ll call Cassie and Sophia. They were mid-way through a turn and talk, each sharing her strategy for solving 84 x 59. I casually moved closer, curious about what prompted the comment and trying hard to see each girl’s strategy, recorded in their math journals.

Upon hearing Cassie’s comment, Sophia responded in an inviting tone, “No, no. Explain to me what you did.” She focused her attention on Cassie’s math journal. Cassie carefully explained how she had written an equation for each part of the problem, and then knew she could find the answer to 84 x 59 by adding up the parts. 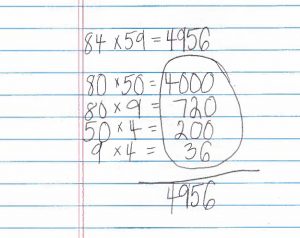 After listening carefully, Sophia responded: “No look, you did the same thing. Our strategies are the same. We just wrote them down in different ways.” Sophia showed Cassie her journal. 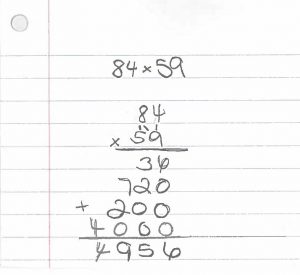 Before reading how Sophia explained how the two strategies were the same, take a moment to consider each girl’s work. In what ways are they the same? Different? What do they seem to understand about multiplication? about place value?

“See?” Sophia draws her finger across 80 x 50 = 4000 in Cassie’s journal and then points to 4000 in her own work. “We both know that 80 x 50 is 4000 and we both got the same answer.” She went on, tracing her finger back and forth between the journals as she connected each part of their solutions.

It was evident to me that Sophia recognized that their strategies shared the same mathematical structure. While I am not as certain that Cassie also recognized this, I do think she followed her partner’s explanation about the ways in which their solutions were connected, and saw that both resulted in the same four partial products. It was also evident to me that both girls were quite comfortable in communicating their thinking on paper and aloud. As I looked around the classroom, I saw pairs of students considering each other’s work. The teacher circulated among them, at times pausing to listen and other times to interact. It was apparent that this was the norm of math class.

I have been wondering ever since this visit, what prompted Cassie’s reaction of “You’re so smart” when Sophia shared her solution. Did she appreciate the compactness of Sophia’s notation? Did she view it as closely resembling the US Standard algorithm for multiplication and identified this with “being smart?” Did she recognize the clarity, precision, and accuracy in her own notation?

I have also been thinking a lot about Sophia’s response to Cassie. The interaction was one of support and acknowledgement of how her partner’s strategy was really the same as her own, just notated differently. Her interest did not appear to be about absorbing the label of “smart,” but instead sounded like a genuine attempt to show her partner that she, too, was “so smart.”

This interaction makes me think about identity and how “being smart” or “not being smart” in math can so quickly shape a student’s mathematical identity. What does it mean to “be smart” in math and who gets to “be smart?” From my perspective, I was honestly drawn to Cassie’s clear notation and her interest in listening to her partner make connections between their strategies.

What stood out to me about Sophia, in addition to her vertical notation, was her interest in her partner’s work, and her choice to use her mathematical understanding to validate what they both understood. Is this part of “being smart?” I certainly hope so.

Clearly Cassie and Sophia are part of a community of math learners that supports and expects students to make sense of their work and the work of others. I would argue that this is part of “being smart” and a critical component of building students’ mathematical identity. What are other aspects of math learning that challenge and expand the notion of what it means to be smart in mathematics? And, how do we create and support communities that help all students believe that they are smart?

← Previous Post: What Happens When There Are More Than 10? Next Post: Asked and Answered: Why Ask the Same Question When You've Already Gotten a Perfectly Good Answer? →